THIS ITEM HAS BEEN DISCONTINUED

Radion Reinvented
The newest generation of Radions radically re-define the simplicity, beauty and power of the LED light. The best aquarium LED light in the world just got better. Simply put, the G4 Radion the best thing since the G3 Radion.
More Color
The Radion G4 features a whole new cluster. The re-balancing of proven colors combined with the addition of warm white and violet takes color rendition for your corals to the next level. Reconfiguration of the clusters compliments the all-new HEI lenses to deliver balanced color mixing better than ever before.
More Coverage
The HEI lenses on the G4 deliver more usable light area. This is accomplished by spreading light that would normally create an area of high PAR directly under the LED fixture and redirecting it to a significantly wider optimal area of intensity for coral health and growth. This will reduce shadowing in the aquarium as well as increase usable space for coral at all depths.
More Civilized
EcoTech aims to produce the most minimally intrusive equipment available. The G4 continues to boast Radion’s sleek styling and small footprint but now also features greatly reduced operational noise. To achieve this the G4 incorporates a completely redesigned heatsink with new geometry and micro-fins.
More Control
More colors means more channels. The G4, like its predecessors, will be instantly recognized by EcoSmart Live and can be added to an existing or new ESL account either through USB or with the Reeflink. *Channel control is updated to match the new clusters and includes Violet and Warm White.
The G4 features water resistant tactile buttons and full integration with EcoSmart Live. Generation 4 includes up to *7 discreet color channels.
*G4 Pro Models Only. 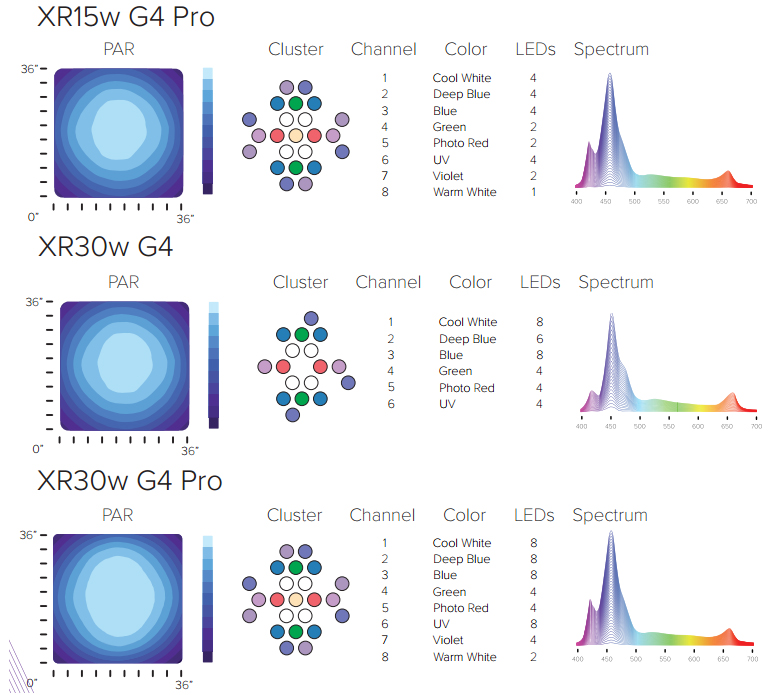 HEI Optics
Hemispherical Edge Illumination
Generation 4 includes the most sophisticated lens design available. HEI lenses deliver the light uniformity and color mixing of a halide T5 combo without sacrificing the power and efficiency of the LEDs.
Color
The G4 utilizes the most advanced top-bin diodes offered by CREE, OSRAM and Semiled to produce mind-blowing color rendition.
The evolution of color in LED fixtures started with the original full-spectrum Radion. The G4 builds on this impressive legacy by further advancing both the available spectrum and channel control.
See color in a whole new light.
Coverage
HEI Optics revolutionize LED output by providing unprecedented light distribution and spread. This lens geometry re-distributes the unnecessarily high par peaks that are otherwise present under the fixture.

How impressive is the new HEI lens design? Just compare the previous generations of Radion lenses, which utilized the best optical technologies of the time. Observing the respective PAR distribution of the reflector and TIR lenses, it is immediately apparent that HEI Optics offer a significant improvement from the perspective of providing usable coverage. 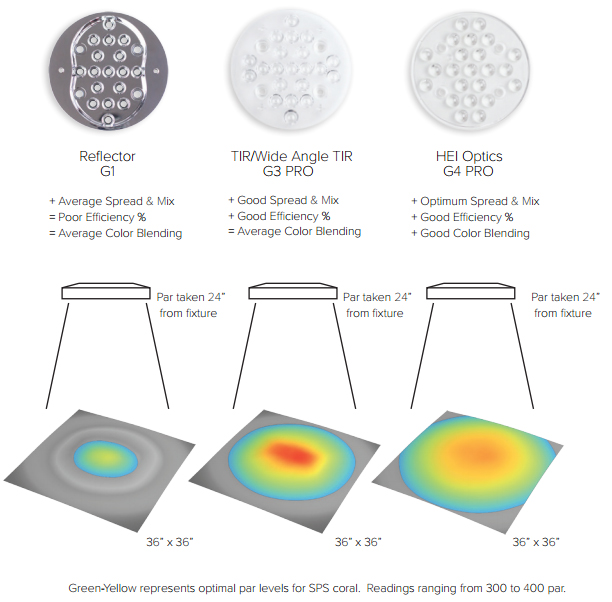 Quiet Active Cooling
The G4 heatsink has been designed from the ground up to maximize surface area and allow for superior heat dispersion. Multiple channels provide unrestricted airflow. With such effective heat management, the need to actively cool the LED is greatly reduced and with it airflow and fan noise.
Optimum LED performance requires active cooling; the Radion G4 uses a proven computer
controlled IP55 rated fan. 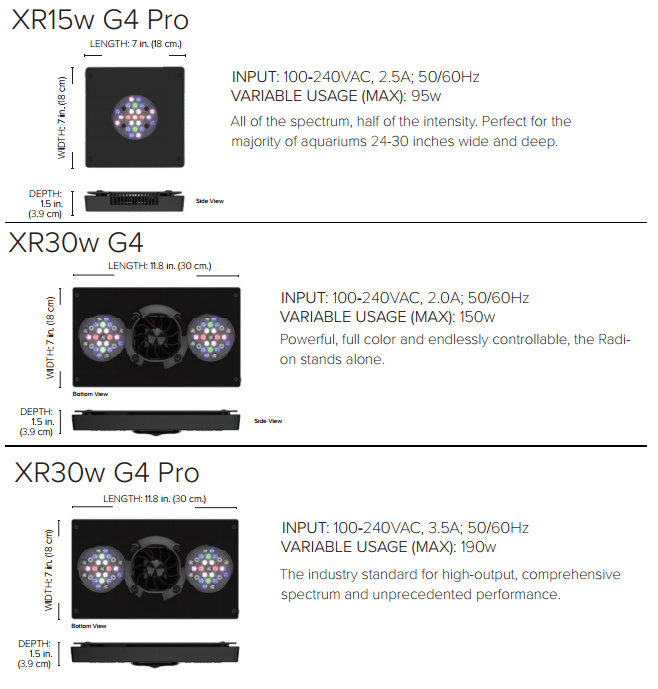 FAQ
What's new in Generation 4?
Radions have successfully been growing coral since the original Radion. Over time the Radion
product has evolved, increasing in range of spectrum, output and coverage along with aesthetic,
control and operational improvements. The Generation 4 offers a further-tuned spectrum,
more even color mixing and superior coverage.
The G4 provides more coverage than the previous Radion models?
Yes. Thanks to the new HEI Optics and LED placement the G4 provides more than twice the
optimal PAR zone as compared to previous Radion generations.
How do HEI Optics work?
The geometry of the HEI Optics accomplishes two things. Light that would normally be lost
tangentially to the fixture is redirected downwards while high intensity output is distributed
outwards. The net result is much larger and more even PAR distribution for significantly more
usable lighting area. PAR testing shows the increase in this area to be substantial.
Will all of the existing Radion mounting accessories work with Generation 4 Radions?
Yes. All RMS and classic mounting solutions such as the hanging kit and classic rails will work
with G4 Radions.
What is the warranty on Generation 4 Radions?
All EcoTech products carry a 1-year parts and labor warranty in the US and the appropriate variation
of that in international markets.
Will the Generation 4 Radion be compatible with EcoSmart Live and my ReefLink?
Yes. The setup and programming of Generation 4 Radions are exactly the same as previous
model Radions. Additional control functionality will be available as appropriate for
Gen 4 lights.
Can the output of a Generation 4 Radions be matched to Generation 3 Radions?
Yes. Although this may require calibration and, depending on level of match, additional
adjustment in EcoSmart Live.
Will there be an upgrade path for previous-generation Radion owners to G4?
No. Unfortunately, the technical improvements in the G4 required the use of a new heatsink,
clusters, lenses and driver board. Because of these changes the shared parts between
the G4 and previous-model Radions are minimal.
Can the HEI lenses be used on previous-generation Radions?
No. The HEI lenses will not fit on prior Radion models because the diode placement on
G4 clusters is different and because the heat sink and cluster position relative to the
baseplate of the Radion is different.
How long will the G3 and G3PRO Radions be supported?
EcoTech will continue to support G3-version Radions for a minimum of 24 months after the
production change to G4.
Will the G3 and G3 Pro upgrade kits still be available for Radion generation 1 and 2
owners?
Yes. We will continue to offer G3 and G3 Pro upgrade kits for foreseeable future.

Radion is the best out there Nov 11, 2018
The XR15pro is perfect for smaller tanks that need the most light. You can't beat Radion for intensity. You do need a reef link if you want to control it over the internet, but the Reef Link can control there pumps as well, so worth the investment. Programming online is super easy, you don't need to be a computer geek to figure it out.

These are expensive, but give you as close to Metal Halide intensity as you can get from LED.
Great light quality but poor controls Jun 13, 2018
This light is difficult to program from a home computer if you do not purchase the Ecotech control box. The LEDs are first class and give excellent flexibility in different light quality. However my first unit failed after 50 days due to a power source failure. Ecotech marine sent me a replacement light at no charge but it failed after one day. My son is a budding electrical engineer and ordered a new power source with a higher amperage rating. The light is now operating flawlessly.