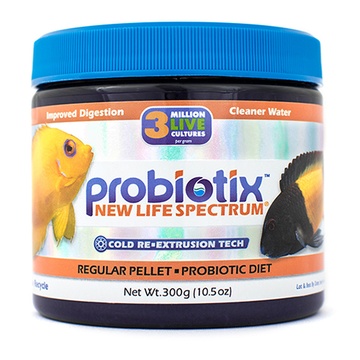 We at New Life are excited to introduce you to what we think is our best Spectrum ever: New Life Spectrum Probiotix.  We’ve made it available to distributors earlier this year, but we thought now would be a great time to tell you about it because it’s getting into stores (and online) so you can all try it for yourselves. We encourage you to support your local reseller, but we did put an online link above in case it hasn’t made it’s way to your area yet.
So, what is Probiotix? It’s the Spectrum Nutrition Formula combined with our own mix of beneficial  probiotic cultures — at least 3 million per gram (which to our knowledge is the most of any aquarium food product). These add to the beneficial organisms that live in your fish’s gut and help aid digestion — more of the nutrients your fish eat are absorbed and converted (this is called utilization ratio). This means that with the same formula, Probiotix is actually more nutritious because your aquarium companions get more out of each pellet! Plus, the nutrient formula is based on our most concentrated formulation: NLS Thera+A.
This boosted effectiveness also means there’s not as much waste byproduct going into your aquarium water. And our proprietary probiotic mix has an extra benefit: we added phosphate-eating bacteria that works in the gut, but also gets into the water column along with the waste — and from there into the filter media. The result? A virtuous cycle in the aquarium that works in the gut, the water and the biofilter.
Creating a probiotic fortified food has been an idea we’ve been interested in for a while. But our philosophy is that we don’t do something simply because it looks good on an advertising sheet. Until we could make something that wasn’t just a gimmick to put on a label, we didn’t do it. We did it.
Probiotix® is manufactured using what we are calling our Cold Re-Extrusion Tech. This gives us high probiotic density (that is biologically effective) locked within the pellet so it doesn’t wash-off in the water and activates in the hot, moist conditions of the fish’s gut as the pellet is broken down.
In brief, Cold Re-Extrusion means we heat-extrude the pellet to pasteurize it, re-grind it, add the probiotics and then re-form the pellet using a cold process made possible by our new, low-starch binding formula — and some clever re-engineering of our machines that keep the dough cool as it’s compressed into the final pellet.
We are pretty proud of this innovation.
Unfortunately, there are so-called ‘probiotic’ foods are simply marketing ploys. The kill rate for probiotics is basically 100% at temperatures above 60-degrees celsius. Traditionally, pellets must be created at over 90-degrees celsius both for pasteurization (legally required for food safety) and for the successful formation of a water-stable pellet. Some foods do say “x cfu or probiotic cultures at the time of manufacture.” This is true but misleading. It means that the beneficial bacteria were alive when added to the mix, with no warranty on how many viable cultures are still alive in the final result.
There are products that spray-coat the bacteria on the surface in an oil solution. We did consider this, but there are several disadvantages. First, it really shortens the shelf life. We’re proud of the fact that Probiotix® has a great shelf life in years, close to our non-probiotic formulas. Second, surface coating is the first thing to ‘wash-off’ in the water so that less of it gets into your fish’s gut. The coating also gets into the water to create an extra ‘film’. Often coated products also have a lower probiotic density than is ideal, sometimes below what we would consider a biologically-significant threshold.
Probiotix guarantees at least 3 million viable cultures per gram — more than enough to work in your aquarium companions’ gut and help support the biological cycle in your tank.
New Life Spectrum Probiotix®comes in pellet sizes from small to large for a variety of fish types, both freshwater and marine. We’re really proud of it and hope you’ll experience the difference!

In Today's video, we take a look at New Life Spectrum Probiotix fish food, which is available at Premium Aquatics.