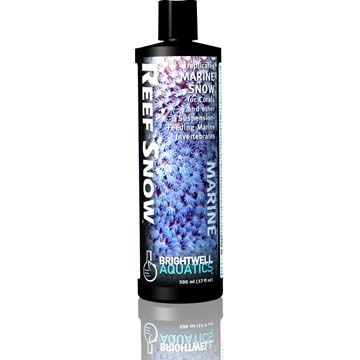 Overview
• Complex of carbonate-bound, non-conservative
major, minor, and trace elements in aragonite ratios,
as well as marine-derived proteins and lipids in coral
tissue ratios.
• Simultaneously delivers appropriate inorganic and
organic nutrients required by stony corals, both
zooxanthellate and azooxanthellate soft corals,
gorgonians, clams, tube worms, sponges, tunicates,
and other suspension-feeding invertebrates for
growth of both soft tissue and skeletal material.
• Ideally fed at night when most corals extend their
tentacles for prey-capture.
• Does not require refrigeration.
• Formulated by a marine scientist.
Technical Background
Marine snow is a term coined by oceanographers to describe aggregate particulate material (which may or may not be organic) falling towards the sea floor; the material, itself, is largely composed of the remnants of deceased zooplankton and large phytoplankton. These organic particles typically become colonized by various microorganisms (primarily bacteria and protozoans) during their descent towards the sea floor; the decomposition of the organic material by the microorganism colony" on each particle recycles the nutrients locked up within it. The constant descent of these particles through the water column has the appearance of snow fall, hence the name marine snow". While marine snow is primarily associated with productive regions of the open ocean rather than tropical coral reefs, the concept (with some improvements adressing the requirements of reef-building organisms) may be applied to reef aquaria as a means of simultaneously delivering organic and inorganic nutrients to corals and other suspension-feeding invertebrates.
Brightwell Aquatics Reef Snow effectively replicates the concept of marine snow by combining a core substrate" of carbonate-bound, non-conservative major, minor, and trace elements (all in aragonite ratios) with marine-derived proteins and fatty acids (all in coral tissue ratios). It does not contain any sugars or their derivatives. Reef Snow delivers both organic and inorganic nutrients to corals and their allies, clams, tube worms, and other suspension-feeding marine invertebrates; it may be of particular benefit to the hobbyist wishing to maintain azooxanthellate soft corals in deep-water biotope aquaria. The collective benefits of providing these nutrients in the same package" are increased growth rates of both soft tissue and skeletal material.
Reef Snow does not require refrigeration, however storage in a cool, shaded area will prolong the shelf-life. Refrigeration will maximize the shelf-life of the product.
Instructions and Guidelines:
Shake product well before using. Turn protein skimmer and other forms of mechanical filtration off prior to adding Reef Snow to aquaria, and allow 10 - 15 minutes after use before resuming operation of filtration. Most zooxanthellate corals extend their tentacles at night, when the majority of coralivorous and zooplanktivorous fishes are asleep and the abundance of zooplankton in the water column passing over and through the reef is at its greatest. Therefore, the most sensible time to feed Reef Snow to corals is after all lights in the aquarium have been off (preferably for at least one- to two-hours) and the room is dark. Using a dim flashlight, illuminate the area immediately upstream of the coral to be fed, then feed as directed below. Slight cloudiness of the aquarium water accompanying dosage of Reef Snow is a result of the inorganic active components entering solution and will dissipate rapidly.
Target Feeding (recommended):
Target feeding may be carried out with a lengthy piece of rigid air tubing, plastic syringe, pipette, dropper, or similar device; suck a portion of Reef Snow into the feeding device, then slowly discharge the contents of the device 2 - 4" upstream of the target organism(s). Repeat these steps as deemed necessary. Do not place items that have been exposed to aquarium water inside this container without first thoroughly rinsing them (inside and outside) with fresh water; failure to do so will contaminate the product and encourage it to decompose. See 'Notes' below regarding maximum recommended feeding amount.
Broadcast Dispersal:
Add up to 2.5 ml (+-capful) per 50 gallons of water in the entire aquarium system in an area of rapid water movement every other day for the first four weeks of use; thereafter, the dosage may be gradually increased if desired.
Notes: Reef Snow should be considered a type of food. Add no more than 5 ml total of liquid food suspensions per 50 gallons of water in the entire aquarium system daily for the first four weeks of use; thereafter, the dosage may be gradually increased as desired. Caution: Keep out of reach of children. Not for human consumption.
Guaranteed Analysis:
Carbonate 2,769 mg/oz. (93,600 ppm), calcium 1,627 mg/oz. (55,000 ppm), strontium 32.5 mg/oz. (1,100 ppm), magnesium 4.4 mg/oz. (150 ppm), potassium 0.3 mg/oz. (10 ppm), moisture (max) 70%, protein (min) 0.5%, lipids (min) 0.15%, fiber (min) 0%.
Ingredients:
Purified water, carbonates of calcium, strontium, magnesium, potassium, marine-derived proteins and lipids.