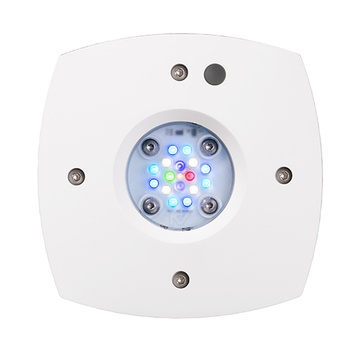 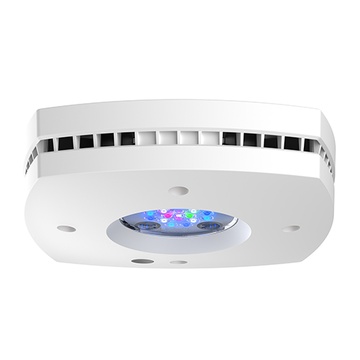 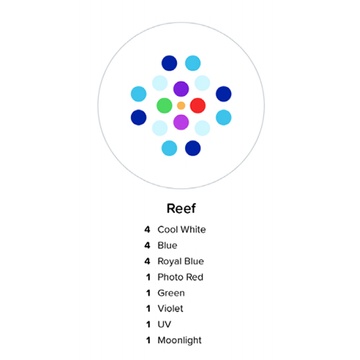 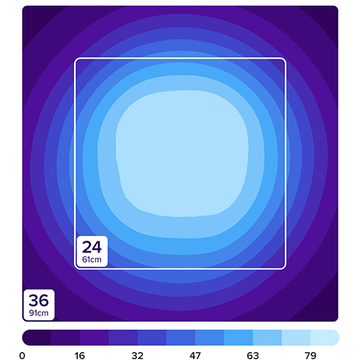 The New AI Prime 16HD shares the same cluster as the Hydra 32HD and Hydra 64HD.
The new Prime will be called Prime 16HD incorporating 16 LEDs (+1 Moonlight) and an
all new TIR optic. The Prime Fuge and Freshwater will also get the new optic and new
clusters. Existing spectrums will be achievable with all new versions of existing lights.
In addition to the Prime 16HD, Prime Fuge and Prime Freshwater there will also be a
new Prime member – the Prime Sol. The Prime Sol is both a nod to the heritage of the
AquaIllumination brand’s first LED fixture and also an answer for those looking for a no
frills coral growing solution.
Design
Redesigning the plastics in the Prime and Hydra lineup has resulted in two major
benefits: better efficiency and better aesthetics. Efficiency improvements reduce the
demands on active cooling for longer component life. Improvements to design thin the
fixtures and reduce their profile and presence over your aquarium.
Resilient
Water resistance is a major benefit in aquarium lighting - and while the new Prime and
Hydras are not waterproof, design improvements make them more capable of facing
the moisture rich adventures of reef keeping.
Moonlight
A dedicated moonlight LED and channel has been added in the new Prime HD, Prime
FW , Hydra 32HD and Hydra 64HD modules. This allows for independent moonlighting
designed to simulate the natural lunar color and intensity.
Control
Control on the lights will use the existing myAI® app which is free, simple and very
quick to program offering onsite direct BLE connection through your smart device.
Additional control options may become available for the new generation Prime and
Hydras over time.
Optics and Output
Output in terms of PAR, color mixing and spread are all improved with the new fixtures.
The incorporation of more LEDs results in a more targeted full spectrum, TIR lenses
shape the light’s output and improve its efficiency. The result is more color POP as well
as a slightly wider output area and higher average PAR. A combination LED placement
and lens geometry blend the light from the clusters so that color separation is further
reduced.
HD
AI’s popular HD functionality, through which a user can route power not in use by
one color channel into another color channel is a much loved feature on the previous
generation HD fixtures. As the new product names imply (Prime 16HD, Hydra 32HD and
64HD) all the new HD lights retain this exciting feature.
Mounting
Mounting hardware as previously available for Hydra and Prime fixtures will work with
the new version lights. The exception is the Hydra Flex arm which will require a different light bracket due to the size difference in the new fixtures. The Flex arm bracket will
change with he new fixtures. Older flex arms being used to mount the new lights will
need a new light bracket.
Mounting Options
The Prime 16HD, Fuge, FW, Hydra 32HD and 64HD can be mounted using the existing
Prime and HMS Mounting accessories.
Flex Arm Mounts will also be available with adjusted clips to accommodate the smaller
footprint of the 32 and 64.